Professor Dave Reay is Executive Director at ECCI, Policy Director at ClimateXChange, Scotland's Centre for Expertise on Climate Change, and Professor of Carbon Management at the University of Edinburgh. 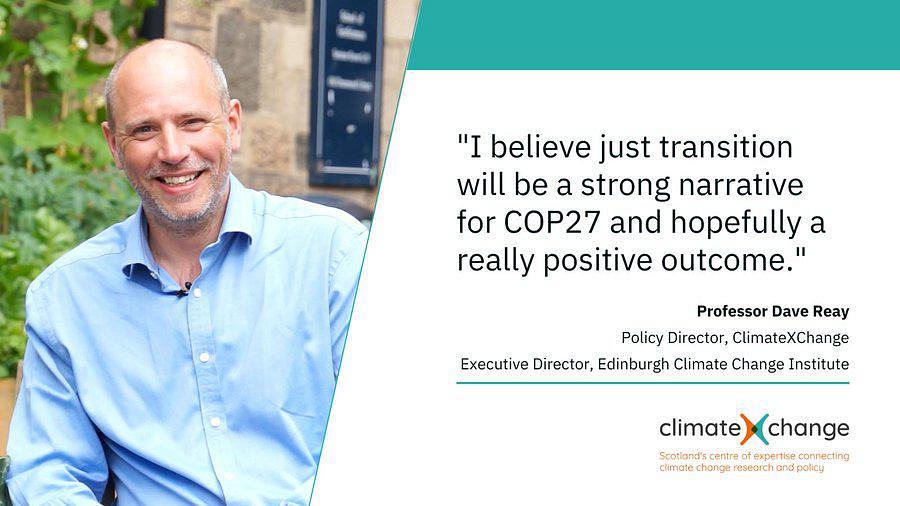 For a more complete account, watch this video. Originally published by ClimateXChange.

During COP27, which starts in a few weeks in Egypt, Scotland will be looking at what new commitments come through, what happens in terms of sectoral action around the world, and what that means for our workforce, research, innovation and investment.

The outcomes from COP26 in Glasgow included some good commitments, for instance with regard to tackling deforestation and reducing methane emissions. For COP27, the world is looking for increased ambition, particularly cutting emissions, but also commitment from all nations on adapting to climate change.

Attention is focused on preventing global average temperatures from increasing 2C or more during this century, with the ambition of keeping warming below 1.5C to avoid extra negative impacts. These goals are part of the Paris Agreement, an international treaty signed at COP21 in Paris.

The level of ambition at COP26 didn't meet that 1.5C goal. The agreement that came out of COP26, called the Glasgow Climate Pact, was partly focused on achieving more ambitious pledges in the run up to COP27.

The pact called for all nations to define how they are going to tackle climate change in updated Nationally Determined Contributions (NDCs), with a deadline of 23 September 2022.

That was a key part of keeping the pressure on and getting us closer to the Paris climate goals. However with the current pledges warming will still be between 2C and 3C globally.

Since COP26, the war in Ukraine, the cost of living and energy, and the food crisis have undoubtedly affected the level of attention and therefore the ambition of pledges on climate change.

Only a handful of countries out of the nearly 200 who are parties to the United Nations Framework Convention on Climate Change have updated or produced new pledges on climate.

For instance, we've seen increased ambition from Australia and new or updated commitments from South Korea and Indonesia. We've seen updates from Brazil, which seem to equate to less action than they were previously taking. Likewise Egypt have updated their commitments, but they don't seem to correspond to increased action with regard to reducing emissions.

A fair transition for workers

COP27 for Scotland, like previous COPs, undoubtedly will be about enhancing bilateral partnerships, particularly with Middle Eastern and African nations around addressing climate change both through adaptation and mitigation, and how this is delivered while supporting people that will be affected by new measures.

A long-term, ambitious collaboration known as the Just Energy Transition Partnership (JETP) was launched at COP26 to support South Africa's decarbonisation and the transitioning of its economy towards renewable energy sources.

The partnership involves the UK, US and the EU working with South Africa to develop long-lasting terms of that transition away from industries with high emissions such as fossil fuel industries, while ensuring that livelihoods and the workforce are supported in that transition.

There are strong analogies with the oil and gas sector here in Scotland as well as many nations around the world.

I believe just transition will be a strong narrative for COP27 and hopefully a really positive outcome in terms of how that model can be expanded to other nations. For instance, Indonesia is very interested in the route towards delivering a fair transition to net-zero emissions and to climate resilience.

Compensation for loss and damage

Loss and damage is the negative impact climate change will have, even after mitigation measures, such as cutting emissions and adapting to higher sea levels and extreme temperatures.

We are already seeing it around the world, so it will be a key part of the COP27 negotiations. Particularly it is important to agree on a financial mechanism to recompense for loss and damage.

Scotland has been closely involved in those discussions and was quite overt at COP26 about the need for more action related to loss and damage.

While it is key that pledges by countries around the world help reach the 1.5C target, it is important to recognise that we need to prepare for warming potentially above 2C in terms of global average temperatures.

That adaptation agenda for Scotland, like every nation, is going to be key, including assessing whether we are ready for warming above 2C and if this is embedded in our planning and investment to deliver climate resilience.

Some of the solutions for tackling climate change domestically come from learning from other nations. A big aspect for us in Scotland at COP27 is going to be building on our own experiences and sharing good practice.

Scotland has been testing climate change targets across different sectors, but also has faced and faces a lot of challenges in terms of realising those targets. So there is value in sharing good practice, but also lessons learned from facing those barriers.

If COP27 builds a platform for increased ambition in 2023 and progresses discussions on issues such as loss and damage, that will be a positive outcome.

ClimateXChange is Scotland’s centre of expertise on climate change, based here at ECCI.

It brings together researchers and policy-makers, acting as a knowledge broker between the two to create evidence-based policies for a low carbon, climate ready Scotland.