The Carbon Scenario Tool (CST) is designed to help local authorities understand their whole area carbon footprint and the impact of actions taken to reduce it.

The Carbon Scenario Tool (CST) is designed to help local authorities understand their whole area carbon footprint and the impact of actions taken to reduce it.

The tool has been developed in partnership with a range of organisations and individuals; this pathfinder project is aimed at understanding how an online version of the tool could be funded and developed to meet the requirements of the net zero transition in Scotland.

What problem is the Carbon Scenario Tool looking to solve?

Increasingly, cities and local authorities are looking at setting net zero targets for wider area emissions; covering not only their own operational emissions resulting from Council buildings, fleet, and schools but also all direct and indirect energy emissions from activities within the geographical boundary. This widening of the target boundary massively increases both the quantity of emissions to be reduced and the complexity of the system by introducing multiple problem owners; both public and private. However, it also better reflects the influence of place-based decisions and opens up the opportunity for local government to work in partnership with citizens and businesses located in their area.

The public sector has significant experience in developing and implementing carbon reduction projects in their own estate; working out the costs and benefits, both in terms of money and carbon. However, projects at the area-wide level are frequently more complex, with the potential to impact on multiple different emission sources. In addition, cities are not static ecosystems; they continue to evolve and develop with new housing, changing businesses and evolving transport needs. Projects to tackle climate change through reducing carbon emissions can also impact on other key sustainability objectives, both positively but also potentially negatively.

How does the CST support public sector decision-making?

The CST has been developed as an early stage modelling environment for any project that will impact on energy use, transport or green space within the boundary; it is designed to take minimal information about location, size and scale and apply local and national benchmarks and produce an initial picture of the impact that a project might produce, including a sustainability dashboard. Populating the CST with multiple projects also enables production of scenarios to check probable rate of progress against targets. The CST can be used to model both carbon reduction activities and projects that are likely to add emissions to the area-wide footprint.

What has the pathfinder project achieved?

The Carbon Scenario Tool Pathfinder project began as a partnership between the City of Edinburgh Council (CEC) and Edinburgh Climate Change Institute (ECCI) to consider how to support decision-making for climate action, which led to the partnership with Scottish Cities Alliance (SCA) to explore the potential to support wider capability and capacity building for net zero targets across city authorities. The project has been funded by the Scottish Government, with the aim of supporting integration of area-wide action with Local Heat and Energy Efficiency Strategies (LHEES).

The project team engaged local authority staff from the seven city authorities and other key stakeholders through a series of workshops and one-to-one interviews and evaluated tools, data and other evidence.

The project lead from ECCI, Carbon Innovation Manager Clare Wharmby, said: “The scope and ambition of the targets set represents a huge change in both the size and complexity of the problem and the requirement for partnership working with the organisations and individuals who control these emissions.

"This in turn requires a coordination and stimulation role by cities, who need effective data and tools to evidence and enable this decision-making, and also the skills and resources to implement action at a pace consistent with deliver of local and national net zero targets.” 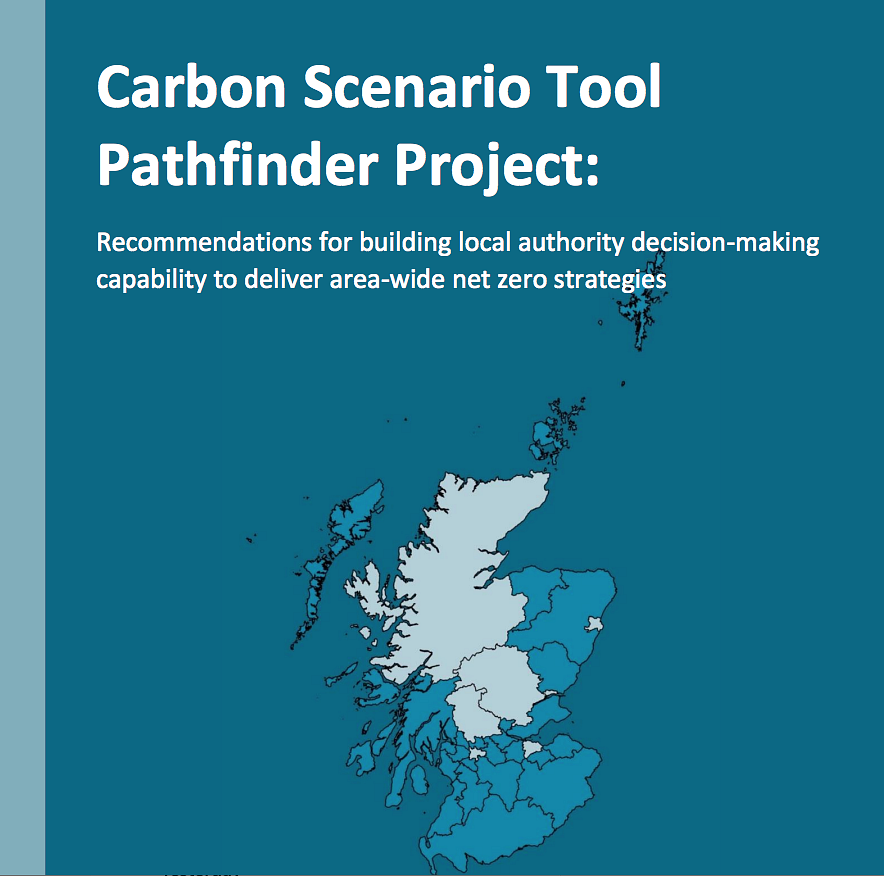 Several key areas were identified that are currently holding back delivery of net zero action:

The project has produced a set of recommendations for Scottish Government, local authorities, supporting organisations such as ECCI, Sustainable Scotland Network (SSN) and the Improvement Service, and the wider public and private sector. These include:

Ragne Low, Head of Heat Strategy, Scottish Government said: “The Carbon Scenario Tool Pathfinder has taken an important step forward in establishing the actions needed to enable consistent and effective coordination and delivery of area-wide net zero targets. It has also placed in the wider context of net zero planning, the key role that Local Heat and Energy Efficiency Strategies will play in setting out the long-term plan for decarbonising heat in buildings and improving their energy efficiency across an entire local authority area.”

Professor Dave Reay, ECCI Director said: "'Newly-elected councils across the length and breadth of Scotland face the huge challenge of delivering fair and resilient climate action for all. Get it right, and our cities and local authorities can be a powerful force for change; one that brings stretching climate targets within reach and that realises a truly just transition at national and local scales.

"The Carbon Scenario Tool Pathfinder project is an exemplar of how cities and local authorities can and must be better informed in the climate choices they all now have to make." Professor Dave Reay, ECCI Director

Following the publication of this report and widespread agreement by stakeholders, the next stage will be to develop a detailed implementation plan with partners.

Find out more about the team involved with this project.